I’m excited to announce that “Tango Stories” will be launching in German in October! There has been a lot of interest in the book in Germany, which is a nation with a strong book culture. German was thus the clear choice for the first language into which to translate the book. We started work on a translation in the spring and I have a team working hard to bring everything together.

The launch party is planned for Berlin on Saturday 5th October.

We still haven’t settled on a title. The English title is not perfect in that it doesn’t really tell you what the book is about. We have come up with a number of possibilities, but they are all longer. The title has to fit nicely into the record label and be legible. Feel free to make any suggestions below!

I will be making more announcements in the next days, including about distribution – watch this space!

Writing the book was an experience of being in flow and I never really thought about what the public reaction might be. As I approached publication time, I asked a few people to review the book. Everyone I approached agreed with enthusiasm. Imagine my dismay when, disagreeing with something on the book’s website – and this was before we had gone to print – one such reviewer chose not to contact me personally but to flame me on facebook instead. The point he made was a good one and I learnt something from it, but it seems he didn’t have any interest in improving the book as a resource for the community.

Tango Stories is a work of opinion. I was clear about that in myself and I took pains to be clear about it in the book. The little appendix on getting started as a tango DJ also caused a storm in the blogosphere. I was worried that I was being too prescriptive by outlining some rules, but the objections came from those who found me too lax.

In a recent blog post, Melina Sedo writes how people have accused her of insulting a world heritage simply for not liking certain orchestras, songs or styles, declaring that she is “surely a crappy DJ who hasn’t got a clue”. I have received similar criticisms, for instance for DJing at milongas with a no cortina policy. Clearly they are not “real” milongas and I’m not a “real” DJ. Oh please!

Don’t get me wrong: an Argentine style milonga with cortinas and cabeceo is a beautiful thing, the maximum expression of everything we love about tango. Personally, I find it very uncomfortable to be in a tango environment where the cabeceo is not functioning. But the idea that this is the only kind of milonga, and that any other kind of milonga is bad and wrong… ? I’m lost for words.

What is an authentic milonga, anyway? For instance, many “traditional” Argentine milongas have breaks of tropical (cumbia) and swing music, something that almost never happens over here, especially at the events that brand themselves as “milonguero”. Let’s not forget that the milonga itself is in a process of evolution. Even the tanda that we now take for granted as a sine qua non of the milonga probably didn’t exist in its present form in the Golden Decade of the 40s.

Tango is alive and resists our attempts to define it, to pin it down, just as a real person does. It is generative and creative, generous even. I don’t know what it is; I love it, and I think it will always be bigger than our idea of it. Maybe God will come down and define tango, but until then, let’s allow one other our opinions, okay? 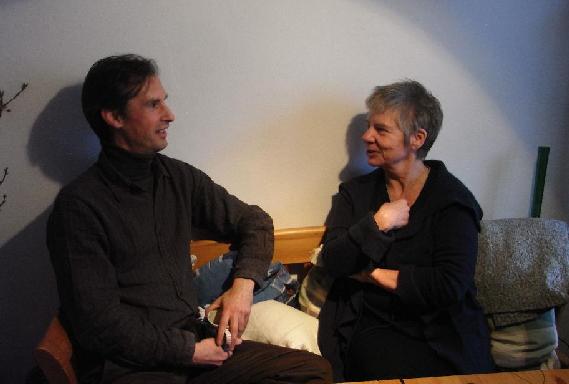 Recently I visited Munich at the invitation of Theresa Faus of Bailongo. Theresa also gives music seminars so she had asked me for some more advanced topics. The lectures were over three days and we had great attendances, sometimes over thirty people.

During my visit Theresa interviewed me for the German tango magazine Tangodanza. The interview concluded with a couple of difficult questions which I was happy to answer. DJs in particular might find these topics of interest.

Theresa: Now some difficult questions. You DJ at festivals and marathons. There’s been some discussion here recently about the importance (or otherwise) of using lossless formats for ripping music to your computer. What’s your opinion?

Michael: Technical aspects are important but only up to a certain point. In DJ-ing, the limiting factor is usually the sound design of the milonga. Very few milongas have a sound system that is good for tango music, particularly in regards to the type, number and positioning of the loudspeakers. The room suffers from reverberations. It will have a frequency characteristic which will need equalising. I have only ever been to one milonga where this was done, but in any case it’s impossible to do perfectly because the characteristics of the room change as people arrive. These aspects make a huge difference to the sound that you hear and are seldom attended to, if ever. In addition, the milonga is a social environment. People are talking and moving, making noise. It’s not the same as listening quietly at home with expensive headphones.

Regarding mp3, in the early days the coders were poor and people often used a bit rate that was too low. Today, the differences between a lossless file and an mp3 file that is ripped with an adequate bit rate are very small. My experience is that you will never hear them in the real-world environment of a milonga. If you are worried about mp3 and your hard disc is big enough to rip everything lossless, then go ahead – why not? Just remember that there are bigger factors that are not under your control.

How adventurous should a DJ be? Should he try to educate the dancers, or should he just play it safe?

There is a consensus about which tangos are good for dancing, but, in my opinion, the idea of an accepted canon of good music is an illusion. To give a simple example, fifteen years ago you didn’t hear Canaro with Maida at the milonga, and “Poema” was unknown, even in Argentina. If we all play only what is already accepted, then we would never hear much of the music that today we think of as “core repertoire”. There is such a thing as a core repertoire, but it is not fixed. It is changing slowly over time.

On the other hand, I’m a bit uncomfortable with this notion of trying to educate the dancers. It could imply that the DJ knows best. Of course, the DJ needs to know tango music well. From his (or her) knowledge and experience he might decide to try some new music. However, it’s the whole community that decides whether or not they like dancing to this music – not the DJ, or some group of experts. So yes there is a process of education but I think we need to be humble about it.

The tour is over, the photos are in, and we have some worthy winners for our competition!

The winning photo comes from Tom Pringle who took the book with him to India. Here he is floating in in the holy river Narmada with his well-travelled and slightly damp copy. A prize of a CD of his choice – and a replacement copy of the book – goes to him. 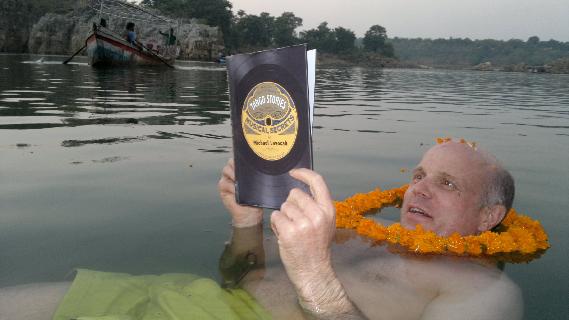 Second prize goes to Siân Fussell for this photograph of her grandson Daniel who is apparently a big Fresedo fan. Daniel writes:

Early Fresedo has a romantic sensibility but stripped of the later sugary adornments. That’s why it’s still my favourite. 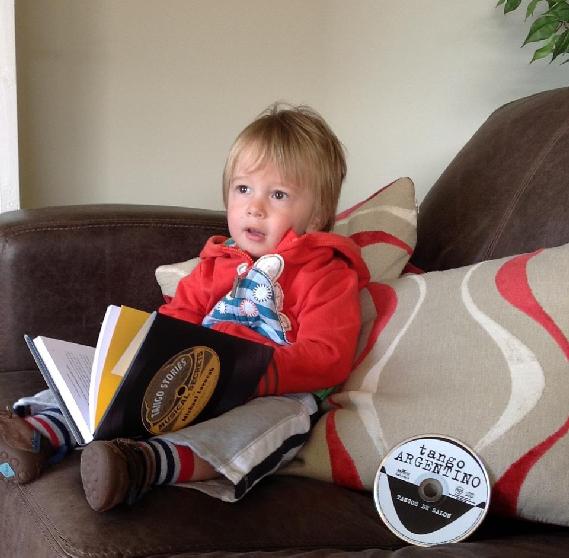 Daniel wins the Fresedo CD of his choice.

Third prize goes to Royce Chau for this photo of the book in the DJ booth in Hong Kong. I like the idea of the book “in the field”, and the addition of the 78 RPM records is a lovely touch. 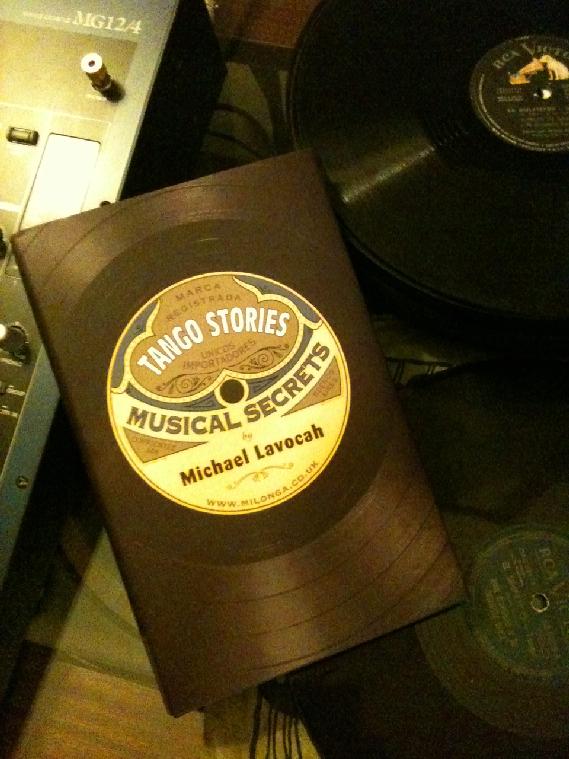 Well done Japan, Russia, Belgium, Iceland and Czech Republic for getting on the map! They join South Korea and Singapore, where my friend Royce Chau successfully brought the book in the recent festival season. This brings the number of countries into which the hardback has been sold up to 32 across four continents:

The German language tango blog Tango plauderei (“Tango chat”) has
reviewed the book, provoking an extensive commentary from the Zurich based tango DJ Christian Tobler. My German is non-existent, but the gist seems to be that both Cassiel (the blogger) and Christian Tobler like the book (mostly), but not the little appendix about Tango DJ-ing for beginners.

Christian makes some good points, but seems to be saying that a “traditional” milonga only plays tango music (no tropical or swing or anything else) and never mixes instrumental and vocal numbers in the same tanda. This has not been my experience in Buenos Aires and I find this definition of “traditional” a bit narrow and restrictive.

The example of Troilo (with Fiorentino) which I use in the book is a case in point. I have to agree with Christian when he says that the energy of these instrumentals is different to that of the vocals. It’s not just the huge contribution of Fiorentino; Troilo often shapes the arrangement of the instrumentals differently right from the beginning. Nevertheless – providing you know what you are doing, and don’t mind creating more movement within the tanda – I think that you can make an effective and coherent tanda with both vocals and instrumentals (although it is more challenging) and at the weekend I heard an experienced DJ do exactly this very well at the marathon in Bergen. Straight vocal or instrumental tandas will of course also work just fine, and are more advisable much of the time. 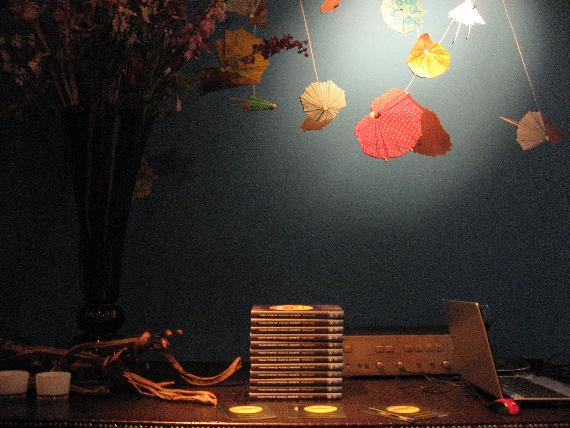 The scene just before my DJ set at the Sweet Milonga in Gouda, NL. 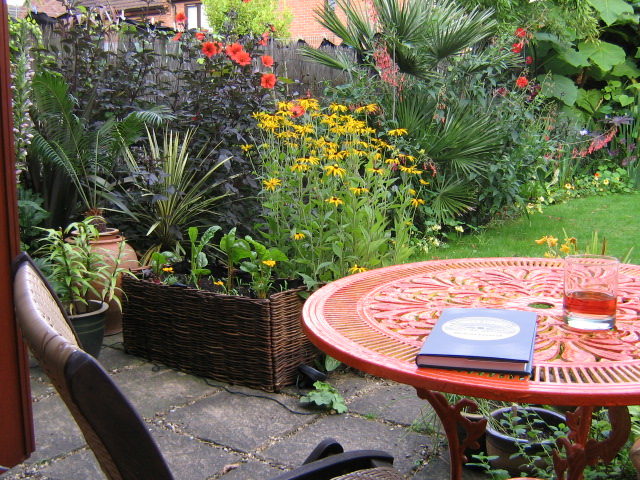 I’ve received a couple of photographs of the book being enjoyed which are inspiring me to run a competition. The best photograph received by the end of the tour (end of November) wins a free CD of your choice. Here’s a strong entry from Jo Parlar entitled “contented sigh”. 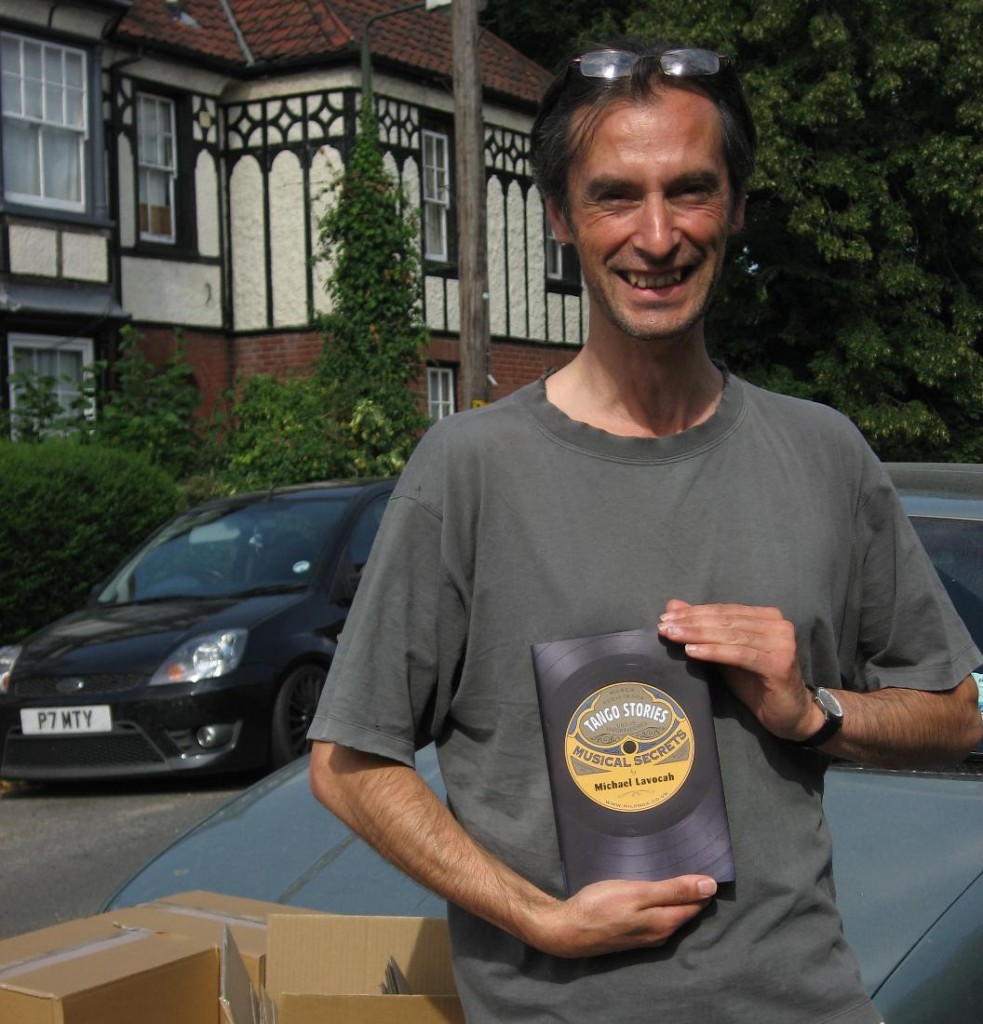 Right on time: 1000 books delivered to my front door.