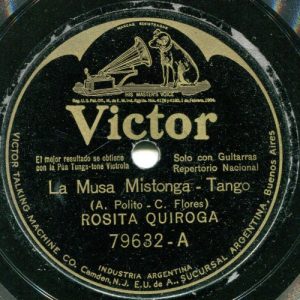 It’s an electrical recording – but can you tell?

The Victor company were the first to bring electrical recording to Argentina. Although their rivals Odeon were not able to follow suit until November this did not give Victor a competitive advantage: both parties had an interest in not advertising the new technology because – if it was really so much better than acoustic recording – who would buy the stocks of old acoustic discs? Victor and Odeon came to a gentleman’s agreement, and no announcements were made. Accordingly, Victor made no changes to their numbering system, continuing with the same matrix numbers, and there was no way of telling if the disc had been recorded acoustically or electrically. Once Odeon went electric in November, Victor’s discs would bear the monogram VE: Victor Electrical.

The first electrical recording was matrix BAVE (Buenos Aires Victor Electrical) 753 and this was given to Rosita Quiroga. It sold over 14,000 copies. By way of contrast, Agustín Magaldi would sell between 5,000 and 16,000 copies, Carabelli’s Jazz Band 7000 copies, and De Caro 1,500. Quiroga’s third disc, Mocosita c/w Horas tristes, sold 26,000 copies.

And who is this Comandante Ramón Franco guy? If you think he sounds like a military type, you would be right: this is General Franco’s younger brother. He made history in January by flying a Dornier flying-boat named Plus Ultra (!) from Spain to Buenos Aires, a distance of just over 10,000km. The flying time was nearly 60 hours.