What’s this – Django Reinhardt, the genius gypsy jazz guitarist, playing a tango? This performance was flagged up when a reader became curious about a tango performed in the Martin Scorsese film Hugo, which wasn’t one anyone recognised. However the community soon identified it as the tango Cariñosa, and the version with Reinhardt came to light. Knowing the deep connection to tango of Reinhardt’s contemporary, the Argentine Oscar Alemán (see my earlier post), I was naturally curious.
It’s easy to hear that Django’s role in this orchestra is relatively small; after his opening flourish, he largely comps along behind the accordion, but listen closely and he makes some nice runs behind the melody. This must date from before the time of Django’s fame and the Hot Club of France, and it turns out that it’s a 1931 recording by the dance orchestra of Louis Vola, made in Toulon. Vola had invited Reinhardt to join his band after hearing him jamming on the beach with his brother.
So is this tango just a footnote in history? Perhaps, but the encounter with Vola is not. In 1934 he was directing a 14 piece orchestra which played at the Thé Dansants at Claridge’s Hotel in Paris. Django was also there, and in the breaks between sets the men jammed backstage, with Stefane Grapelli on violin, and Louis Vola putting down the accordion for the double bass. This group was the forerunner of the famous Quintet of the Hot Club of France, and it was Vola who brought the men together. Here’s a photo of that group. 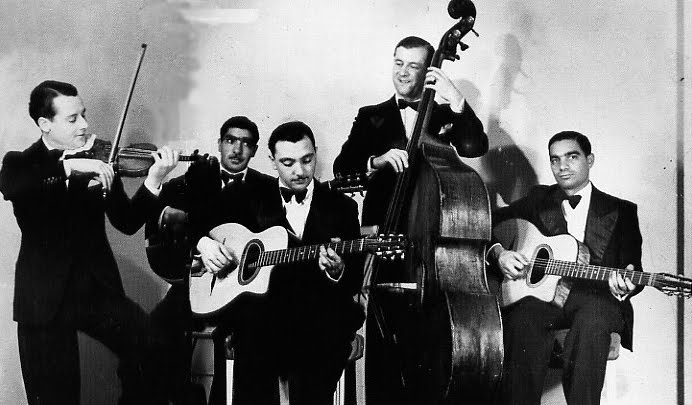 References
– Georg Lankester: ‘Louis Vola and the birth of a quintet’ on the blog